Translated with Secret Alien Technology:
My journey began in the North. I followed the signs for a magical snowman who would show me the way to a certain toy workshop. I had the santa suit, I had the laugh, but I needed presents. Christmas was only a few days away! 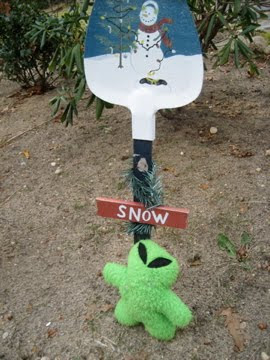 Hmm. I don't see any snow.
After weeks of searching and a few, short detours, I found the giant snowman. 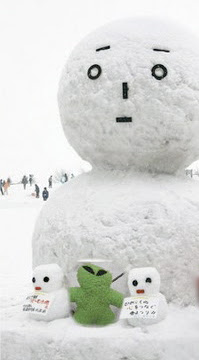 He told me a story about how his brethern had been taken hostage, and he needed help rescuing them from "The Collector", but I didn't have time! I'm only one Alien. Thankfully his little helpers wrote the directions down for me. And I was on my way. 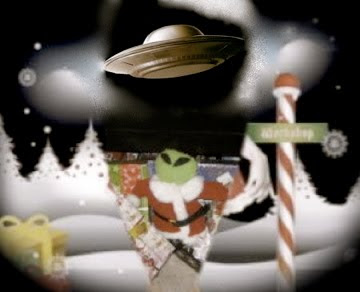 Once in the North Pole, I loaded up my spaceship--and the sleigh and reindeer I found in some shed in the back--with a bunch of presents that were lying in the snow.
Some little men with pointy ears were highly agitated. But although I speak roughly 800 languages, including some gnome, apparently I don't speak Elvish. 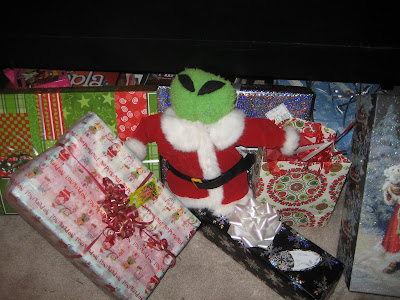 No. I'm not the Grinch.
Despite the elves attempts to jump on my spaceship, and the damage they did to my nucleur reindeers, I was able to escape their crazy workshop and continue on my mission, with the help of my friends. If only I could get the reindeer away from the mini bar and the kegs the Minx left in the storage room.
My adventure had only just begun.

These adventures are so much fun!! I am loving reading them and wish I could be creative enough to come up with something good!! Thanks very much for the card that I received today!!! Lots of love, Debbie and Holly

NAK and The Residents of The Khottage Now With KhattleDog! said...

As long as there is snow, I'm there!

I can't wait to hear more either. It's been fun reading everyone's Christmas stories.

BOL! You are only one Alien, but you have mastered the art of dual realities - the ability to be in more than one place at once. Whatever that means?? All I know is you were with me (two days from now) at Martini Madness. That's my story and I am sticking with it!

Oh Alien, we could never mistake you for the Grinch! Just, um, don't let Lilac talk you into wearing a Santa hat, okay?

Alien is my hero!

What, I thought for sure your spoke Elfish!!!
Merry Christmas my friend! I enjoy your adventures!
xxoo
Deborah

Alien Santa is going to be mad!!!

Are you the Grinch's evil twin, Skippy?

Can't wait to see what happens next :D

PeeS: So glad your package arrived! Yay! We had so much fun with that :) Merry Christmas :)