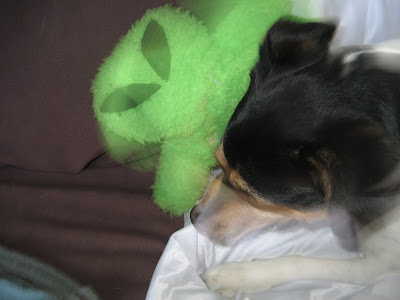 No. I haven't been drinking too much Hibarian moonshine. This is my latest Time Travel experiment. These photos capture Sallie and I moving faster than the speed of light. 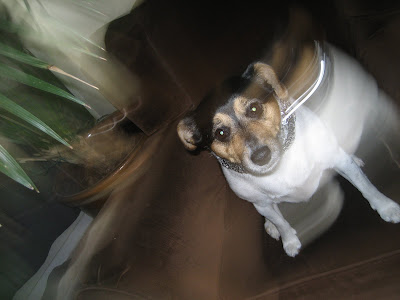 And it is good timing too. I've heard some disturbing reports of piracy lately. No. Not Internet piracy.
Pay attention!
Actual pirates on the open seas. And to make matters worse, one of the reports described the ringleader as a small green man with a pointy head. Sallie and I are off to investigate. I have a sinking feeling that my cousin, Freddy, is involved. Stay tuned...
Posted by ♥ Sallie at 12:41 PM

Pirates??? Harr, matey - need some helpers there? We would love to learn to move faster than light. Maybe then we could get to all those places that have snow when we have none.

OH NO... Alien... do you think you should be involving such a delicate lady as Sallie Marie is??? I mean.. PIRATES are Mean and Dangerous almost like Squirrels.
I can't wait to see what you are going to do.

Um, I think Frankie is right. This might be dangerous!

Buckle up! It sounds as though this could be a rough ride!

Freddy is up to no good AGAIN?! I can't believe he hasn't been sent to Hicbarian prison yet!

The Ladies of Beaglebratz Manor said...

Shasta here - I gotta nu friend my mom got fer me - u shood stop by our blog at ->
http://beagle-home.blogspot.com/2011/04/bizy-on-sunday-mom-that-iz.html
It'z this last Sunday'z post - hiz pikchur iz at the bottom. He duzn't haf a pointy head - it'z kinda shaped like a football. May-b u know him? He won't talk tu me.

OMD...I thoughts I was drunk furs a second but it was you...I mean your fotos.
Hmmmmm...Evil Freddy is up to no good (scratching chin). You knows, ya'll really don't looks like cuzzins.

Harr, Harr, Harr Maties! Careful of those pirates, they sneak up on you when you least expect it! Hope you get to the bottom of this!

Alien
Take good cawe
I have a tewwibull feeling about Fweddy
I'm wowwied about Sally's safety too.
Let me know if you need help
smoochie kisses
ASTA

Yes, I think I know that guy, Shiloh.

Alien ...Sallie ...is that you? I am on some serious pain meds and everything looks a little funky. What's this about pirates? You just say the word and I will come help you ...once the room stops spinning!

You got me all worried now,,,,, PIRATES!!
oh no-- whatcha gonna do?
love
tweedles

Oh no could it be cousin Freddy?
Benny & Lily

I am dizzy looking at you both traveling so fast! Woofs that must be fun!

Well, mateys, be careful on the open sea! And if you find any pirates, make them walk the plank! But then pick them up and lock them in the cell.

You're not talking about me are you? Because I've been on a very top secret project for the past few days, making a pirate costume for myself.

Pirates did ya say? Yikes! Alien you better help Mom get my tail back soon so I can be available to assist you with those nasty swashbucklers!

PeeS: Mom wants to know if its okay for Alien to visit her lab. She needs his expertise on makin the zapped matter unzapper work right. Please help her!
Oh and she's had someone puttin up with her (besides myself that is) for almost two decades. She's was very flattered when I told her about your slight crush ;) Face even turned a shade of red! Hardy Har Har Good goin my furiend :D

Gracious she is fast isn`t she?!

Be careful, you two. Call us if you need "muscle."

Go get him Sallie and Alien. If you need any back up, give a yell. We're here if you do.

uh oh, this sounds way serious! ya'll pretty please be careful! oh, and definitely use that muscle from gizmo, bart, and miss ruby. they sure have lots of it!

Wow, time travel and pirates! What an adventure!!! Be careful, okay?