The Story of the Alien's Necklace. (Part 1) 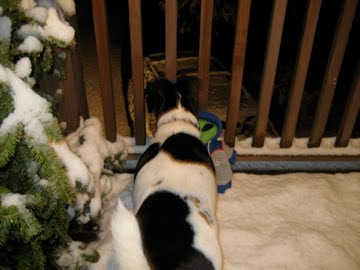 The snow came after Christmas, coating the ground in a shimmering blanket. I bundled Alien up in a sweatshirt and dragged him outside. He won't tell you this, but he doesn't like the cold. Alien's body regulates his temperature, so it's not the wind-chill factor that makes him hate this time of year. The cold reminds Alien of his home planet, Hicbar, and of his mission to find a bride. Though Alien dates like a tomcat, he hasn't found the right girl. Today I saw him holding a necklace, one of many treasures he plans to give to his bride. He dropped it in the snow, the weight making it sink until only the chain remained. 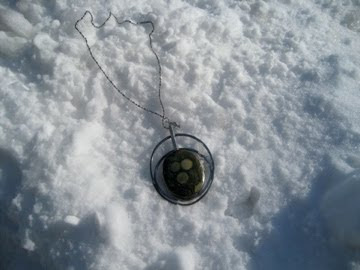 "I'm beginning to give up hope," Alien said, lying down, letting the snow cover his small, green body.
Using my teeth, I grabbed the chain and the end of Alien's sweatshirt and shook them free of snow. "Valentine's Day is just around the corner," I said, letting him go. "Let's throw a blog party! " 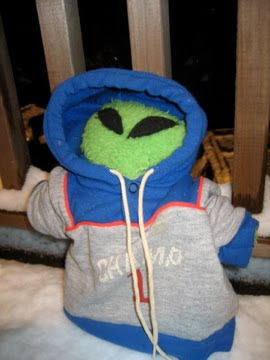 "A blog party?" Alien perked up. "How does it work?"
I teased him by swatting him with my tail. "Leave all the arrangements to me."
Posted by ♥ Sallie at 9:27 AM

Sounds like some fun is coming down the road:)

Alien we love the hoodie and the bling
Benny & Lily

A blog party? This sounds exciting! We can't wait!

BLOG PARTY? I can't wait to hear all about it!

Heck yea, I loves to pawty but I guess ya'lls knew dat.

A blog party! What a great idea! I'm in!

Cheddar
(using my mom's puter, which is verrrry embarrassing)

Now that sounds like lots of fun!! Can't wait to hear the rest!! Lots of love, Holly and mom

Is a blog party anything like a block party?? And I am sorry Alien is having such a difficult time hooking up with a girl freind.
Can I come to Aliens blog party??
Hugs and wags, Mistaya

Sounds like it is going to be a pawesome party!
I can't wait!
Kisses and hugs
Lorenza

'dis sounds fun!!
We needed a bit of cheering up!!
and a certain little pink gurl over here tinks 'dat necklace is perfect for her... hee hee

*sigh* We hate the thought of Alien being sad! A blog party cheers us up, though!

OMD! We found Leanna Renee Hieber's blog and followed it. We were surprised to see she followed us back! I guess I shouldn't joke about chasing bunnies now.

I knew you would like Leanna's blog, and her bunnies! LOL! She is super nice. I'm sure she will like your blog too!

Oh boy! A Partay! There must be a green girl out there for Alien!!

LOL thank goodness for Google Alert on my name - because now thanks to you wonderful folks I've enjoyed utterly delightful blog reading. Sallie and Alien have made my day and I look forward to checking in on them.

*grin* at Bunny - I can't blame you for your training. Persebunny might, though. :)

The Race Against Time said...

a blog party? woohooooooooooooo... i am in.. when when :D i love pawwwwwwwtys

That's a cool necklace Alien. If I were a single gal or just a gal, I'd date ya just for a chance at gettin it ;)

Did you say pawty? :D

A blog party??? It sounds so interesting and fun in on the way!
Can't wait to hear more about it.
We are sorry that Alien feels sad though, hope there is a right girl for him soon.

WooHoo A valentine blog pawty kewl I may find da girl ov my dreams. I sure hopes so, count me in Sallie
Luvs
Richie
xx xx

I see LOTS of comments here from Girrrrrls. Grrreat chance fur you to scope out the wimmen.

A blog paw-tay?! Count me and my boys in!

You are rockin that hoodie!

Oh Alien, don't give up hope!! If all else fails, you could do a reality show (on your blog) like the Bachelor. I am sure there would be lots of ladies signing up to compete for your affections.

Pawty? Did someone say pawty!!?!

Ooooo this sounds fun. I should know that Romance Puppy is getting excited for Valentine's day too!

Hey Sallie & Alien!
Wow, a galactic-sized party would be pawesome! Hang in there Alien...someone's out there looking for a green little cuties like you. PAAAARTY!
Grr and Woof,
Sarge, COP

Hello, I'm Chicco a small dog. Your blog are very beautiful, would you like to visit me?
chiccoeilsuomondo.blogspot.com

I've been busy on your behalf my furiend ;)

PeeS: Hope this doesn't make you mad at me for stickin my nose in your business :O

Such a cute post. I'm a new visitor and I like the adventures of Sallie and Alien. Will be coming back, take care!