Fire on the Spaceship 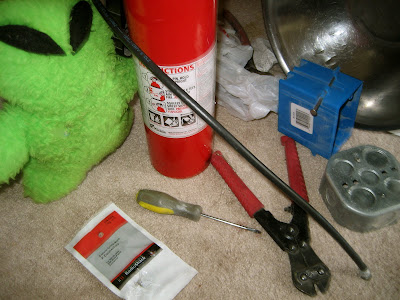 There I was, flying home from my favorite martini bar, when my spaceship's console burst into flames. I grabbed the extinguisher and a bucket of sand as warning sirens wailed and the ship lurched. My heart pounded in fear as I punched in the emergency codes, triggering the auto pilot with one hand, and dousing the fire with the other.
After a grueling several minutes of combatting the flames, the fire was out and I had gained control once again. I thought, If only I had a help mate. A Co-pilot aboard, and in life, the damage to the ship may have been better contained. Was I destined to die alone in a spaceship crash without ever falling in love? 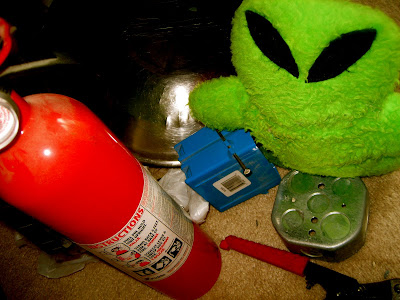 As I surveyed the damage, I thought of my cousin, wondering if he had tampered with my spaceship as he had done in the past. But there had been no word or sighting of him in months. It was as if he had vanished to some magical, winter wonderland.
Perhaps, he had perished alone first.
Posted by Alien at 2:28 PM

UhOh....glad you knew exactly what to do! And you are safe!

thank goodness you had all those accessories with you...its nutty out there
Benny & Lily

*sigh* Oh, the heartache of unrequited and unrealized love! We're all hoping you find the girl of your dreams and make it back safely. Knowing that Freddy, he's not done for yet!

Keep looking. there must be lovely alien just waiting for you.

Yikes! That sounded scary - luckily you avoided disaster Alien.
Somewhere in a galaxy near you is the perfect Alieness :)
Dip Bridge and Elliot x

We have GOT to find you a LADY.

I am so very much glad that you have had all the practice drills and knew just what to do about the fire.

HEY.. we need a girrrrl to be your Flame.

Hey Alien!
Wow, I bet that was super-scary! You sure do need a lady-friend...maybe Princess Leia?!? She likes the outer space type.
Grr and Woof,
Sarge, COP

Oh Alien! We are so glad you made it! On a different note... Have you ever considered Sallie to be your girl?

Thank goodness you had the right tolls to extinguish that fire! Whew! Close call buddy!

What a bittersweet post. Very scary, and I commend you on your bravery! Job well done! But I feel sad that you feel sad and alone at times. There is someone out there for you, someone you can love and who will love you back. Don't give up hope - she is out there waiting for you!

As for your cousin, I think he is in a secret hide-away planning his next move.

Alien pal Haroooo! :D Glad you got that fire out Yikes! :O Maybe you should find a co-pilot that drools a lot. Make a good fire extinguisher eh? ;) Where is that Evil Freddy hiding anyway. I'm sure he hasn't perished (don't perish the thought BOL ;) Bet the blue bugger is up to somethin naughty fur sure ;O